When Bill Gates first met Warren Buffett, their host at dinner, Gates’ mother, asked everyone around the table to identify what they believed was the single most important factor in their success through life. Gates and Buffett gave the same one-word answer: “Focus.” (See more in The Snowball by Alice Schroeder).

I love the clarity of their answer but I am also concerned by how this can be, to quote Rudyard Kipling, “twisted by knaves to make a trap for fools.” I am an advocate for focus in work, life and leadership. However, the subject has a nuance and depth that many people miss. For a start, most people think of their only being one kind of focus.

Focus as a Noun. When people speak of focus they usually mean having a single goal. It is a static thing, a thing you have. This kind of focus conjures pictures of Roger Bannister relentlessly pursuing his goal of breaking the four-minute mile, John F. Kennedy challenging NASA to put a man on the moon within a decade or, coming back to Bill Gates, a vision of a personal computer on every desk. The upside to this kind of focus is clear and compelling: you pursue a single objective and don’t get distracted along the way; you build momentum as many different people aligned behind achieving this one goal.

However, there is a dark side to focus as a noun. It’s what we might think of as the Kodak Problem. Kodak was relentlessly focused on a single objective—and it almost killed them. They found themselves caught off guard by the disruptive innovation of digital cameras. Kodak was so focused on optimizing for traditional film capture and processing that they did not see or accept the transformation in their industry. This is where the second type of focus comes in.

Focus as a Verb. Focus is not just something you have it is also something you do. This type of focus is not static; it is an intense, dynamic, ongoing, iterative process. This kind of focus conjures pictures of Steve Jobs saying to Jony Ive day after day, “This might be crazy, but what if we…” until once in a while the idea took the air out of the room. It’s the constant exploration needed to see what is really going on and what the “noun focus” should be.

Imagine if the moment you woke up this morning your eyes focused one time and then never adjusted again. You would be out of focus all day. Our eyes produce clarity through a perpetual process of adjustment. Similarly, in our lives and on our teams, it is not enough to say, “We have our focus!” Rather, and adapting Dwight D. Eisenhower statement, “Focus is nothing, focusing is everything.” That may take the point too far, but it still makes the point that having a focus is insufficient.

The downside to thinking of focus as a verb only, is that it can lead to being overly reactive. It can lead people to making and remaking decisions too fast for any real momentum to take place. It can result in counterfeit agility where things feel fast but people aren’t going forward. It can become motion sickness instead of momentum.

The answer is to develop and value both types of focus. Professor Henry Mintzberg taught that there are two sources of strategy: deliberate strategy, where leaders develop a clear vision and map this to long, medium and short term goals (focus as a noun) and emergent strategy, where people respond to unanticipated problems and opportunities (focus as a verb). It is the disciplined pursuit of both of these approaches that best enables us to focus on what is essential. We can plot this on a two by two to see what is at stake. 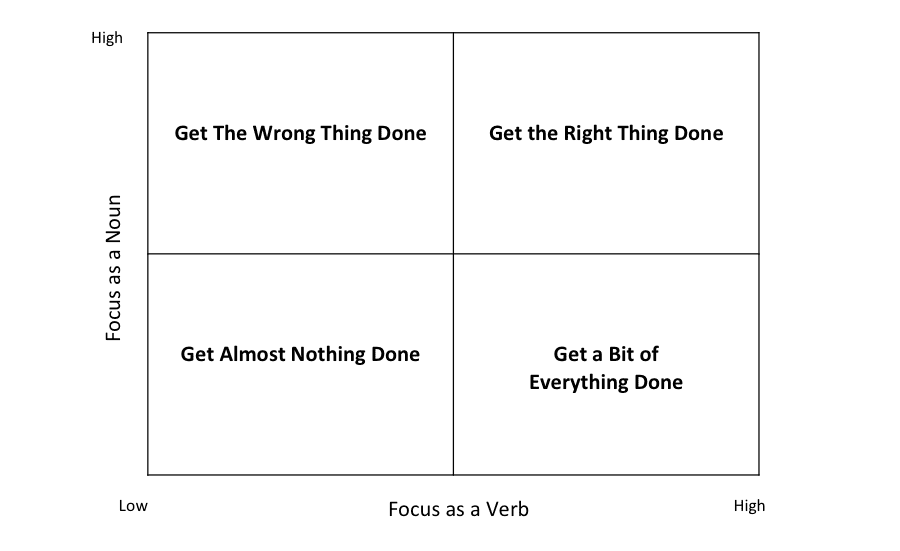 Here are three ways to combine both types of focus to ensure we getting the vital few things done.

Ask the right questions. Bill Gates said of Warren Buffett, “I first met him… at a dinner my mother had put together. On my way there, I thought, ‘Why would I want to meet this guy who picks stocks?’ I thought he just used various market-related things—like volume, or how the price had changed over time—to make his decisions. But when we started talking that day, he didn’t ask me about any of those things. Instead he started asking big questions about the fundamentals of our business. ‘Why can’t IBM do what Microsoft does? Why has Microsoft been so profitable?’ That’s when I realized he thought about business in a much more profound way than I’d given him credit for.”

In order to have focus we need to escape to focus. As I wrote in Essentialism, “I once attended a question-and-answer session with Bill at the headquarters of the Bill and Melinda Gates Foundation in Seattle, Washington. By chance he had just completed his latest ‘Think Week.’ Though I had heard about this practice, what I didn’t know was that it goes all the way back to the 1980s and that he stuck to it through the height of Micro- soft’s expansion. In other words, twice a year, during the busiest and most frenetic time in the company’s history, he still created time and space to seclude himself for a week and do nothing but read articles (his record is 112) and books, study technology, and think about the bigger picture. Today he still takes the time away from the daily distractions of running his foundation to simply think. Whether you can invest two hours a day, two weeks a year, or even just five minutes every morning, it is important to make space to escape in your busy life.

Know how valuable your time is. As Bill Gates has written, “No matter how much money you have, you can’t buy more time. There are only 24 hours in everyone’s day. Warren has a keen sense of this. He doesn’t let his calendar get filled up with useless meetings. On the other hand, he’s very generous with his time for the people he trusts. He gives his close advisers at Berkshire his phone number, and they can just call him up and he’ll answer the phone.”

Focusing on what is essential is a powerful ability, perhaps the most powerful in a world where we are so bombarded with distracting ideas, information and opinions. However, if we want to consistently give our energies to what is essential we need to develop both kinds of focus. Only in this way can we answer with confidence the question, “What’s important now?”

Read the original post: To Do Things Better, Stop Doing So Much – Linkedin Blog

Bonus: By joining Greg's Newsletter, you'll get Chapter One of "Essentialism" FREE