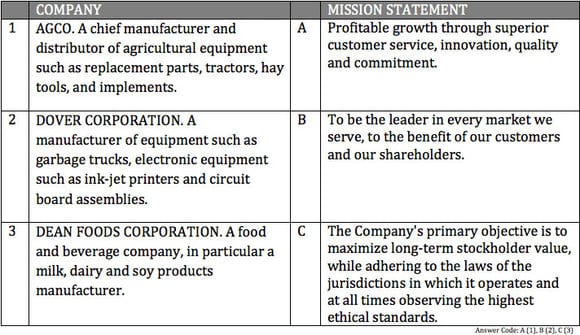 How did you do? The largely indistinguishable statements make the task almost impossible. Such statements may still be considered “best practice” in some quarters but in so many cases they do not achieve what they were intended to achieve. Ironically, many “directional documents” are not fit for purpose: they do not provide direction.

At the risk of adding another consulting cliché to the mix, we can map the most common directional documents on a practical two by two to help us to make sense of them. 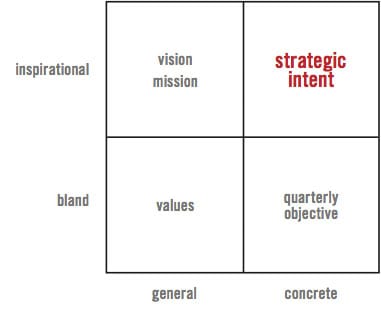 On the one hand, we have vision, mission and values statements that sound inspirational, but are so general they are almost entirely ignored. On the other hand, we have quarterly objectives we pay attention to, but these shorter term tactics can lack inspiration.

What becomes clear is that we are missing a directional document that is both inspirational and concrete. We need — using the language from Gary Hamel and C.K. Prahalad in their HBR piece — Strategic Intent. Going beyond their original definition, I advocate that executives develop a single 3-5 year strategic intent that is both aspirational and measureable. This can sound simple, but getting it right is not for the faint-hearted. It takes courage, insight and foresight to create such strategic clarity. Consider the following guidelines:

First, stop wordsmithing and start deciding. When Martha Lane Fox was asked by the British Prime Minister to be the U.K.’s Digital Champion, there was every opportunity for her to create an unintelligible description of her role and purpose. You can just imagine Martha trying to explain the role: “Well… it means to develop digital readiness for the transformation of the 21st Century to modernize Britain and create a more digitally-literate country.” Instead, Martha and her team came up with this strategic intent: “To get everyone in the U.K. online by the end of 2012.” This clarity empowered the team to know exactly what they were trying to do and what they were not trying to do. It allowed everyone on the team, however junior, to push back and say, “But does this new idea really help us to achieve our intent?” And it enabled their partner organizations to massively accelerate the journey for millions of people to get online. (Read the Capgemini independent evaluation of the impact of this campaign here). Such clarity is to be applauded even when, as is the case with Fox’s Race Online 2012 campaign, the full aspiration isn’t reached. They reached millions of people but there are still millions who will not be online by the end of this year. For starters, if you don’t have strategic clarity in the first place, then you can’t produce a clear evaluation afterwards. There is a tendency in developing directional documents to start saying, “Should we use this word or that word?” When you start doing that, stop yourself. Instead, ask about the tradeoffs: “If we only get one thing would we want X or Y?” Done right, a strategic intent is really one decision that makes 1,000 decisions.

Second, ask, “Will we know when we are done?” When we think of inspiration, we often think of the lofty rhetoric of a Martin Luther King Jr. But concreteness has the power to elevate aspiration as well. This was illustrated brilliantly to me by Professor Bill Meehan, who spent 30 years with McKinsey advising CEOs and senior leaders on strategy. He is now a faculty member at the Stanford Graduate School of Business, where he teaches a class called “The Strategic Management of Nonprofits.” One of the assignments he gave his graduate students was to evaluate the vision and mission statements of nonprofit organizations.

As we reviewed more than 100 examples, we noticed how many were grandiose but uninspiring. One had the mission to “eliminate hunger in the world,” but with just five people in the organization, the mission felt like little more than empty words. Then, out of the cluttered landscape of such loose idealism came a crisp statement we all immediately understood and were inspired by. It was from the slightly unexpected social entrepreneur Brad Pitt who, appalled by the lack of progress in rebuilding New Orleans after Hurricane Katrina, started Make It Right with the intent “to build 150 affordable, green, storm-resistant homes for families living in the Lower 9th Ward.” That statement took the air out of the room. The concreteness and narrowness of the objective made it real. The realness made it inspiring. (Read of some of their progress here). And it showed that a concrete strategic intent is better than a general mission statement, however grandiose. A powerful strategic intent inspires people partially because it answers the question, “How will we know when we are done?”

Third, move from “pretty clear” to “really clear.” Executives often suggest that their strategy is “pretty clear” on the basis that this is good enough. But anyone who wears glasses knows there is abig difference between pretty clear and really clear! Even people who say they value focus and clarity often set their bar too low. Being pretty clear means we have a general sense of the direction in which we’re going, but being really clear means we also know what we are not trying to do. Let’s use Apple’s strategic intent for the iPod as a barometer of the difference. They didn’t say, “We want to create a great digital music player.” They said we want to put “1,000 songs in your pocket.” (See Steve Jobs talk about this intent here).

Achieving strategic clarity is hard. It takes asking tough questions about tradeoffs, deep concentration to get to the very essence of the issues and real courage to cut off competing priorities. It is worth the effort because with real clarity, people, teams and organizations can fully mobilize, break through to the next level and achieve something truly great.

Bonus: By joining Greg's Newsletter, you'll get Chapter One of "Essentialism" FREE